Showing posts from February, 2020
Show All

February 27, 2020
General Information: European polecats - previously referred to as a 'foul mart' due to their unpleasant scent - are considered to be the ancestor to the domestic ferret. They're from the same family (mustelids) and also have a very similar appearance to some ferret coat varieties.  Appearence may vary slightly depending on the subspecies. One of the more common reasons individuals end up with a pet polecat is due to mistaken identity, they're often confused with ferrets, and some are ferret/polecat hybrids. Less commonly, polecats may hybridise with minks, but they're rarely kept in captivity. Husbandry for the European polecat and hybrids is similar to ferret cousin's, but they do often present with more problematic or fiesty behaviour (not always, but frequently) as they're far more difficult to tame. This is because polecats are not as domesticated as ferrets, and are frequently used for hunting. European polecats have an average lifespan of
Post a comment
Location: Cheshire, UK
Read more

February 15, 2020
General Information: Buying and selling chipmunks is illegal in Great Britain due to them being classed as an invasive alien species by the European Commission. Non-native species EU IAS Regulation GB If you own a chipmunk, you're legally allowed to keep them throughout their natural lives, but please be familiar regarding the laws of keeping chipmunks. The most commonly kept chipmunks are Siberian chipmunks that originate from Siberia and throughout Asia. They're an active rodent that can live on average 4-6 years, but ages up to 10 years have been documented. They usually exhibit diurnal behaviour and are omnivorous. Despite being a social rodent, chipmunks - commonly referred to as 'ground squirrels - aren't typically easy to handle and can be quite hard to keep. Due to this, we would only recommend chipmunks to keepers who're experienced with exotic rodents. Care: Housing/Enrichment: Chipmunks are best housed in large metal bird cages or a
Post a comment
Location: Cheshire, UK
Read more

February 14, 2020
General Information: The name 'flying squirrel' actually describes over 50 species within the family Sciuridae. Their name is somewhat of a misnomer as flying squirrels are not capable of powered flight like that of a bird, but they do glide.  Flying squirrels have wing-like folds of skin that are referred to as patagia. The patagium membrane can be found on flying squirrels, bats, and other gliding mammals, and will assist them when gliding by acting similarly to a parachute that prevents them from plummeting down. In addition, they have cartilage spurs on each wrist that can extend similarly to fingers, further stretching the patagia - we won't go too deeply into bio-aerial locomotion. Although they're incredibly agile gliders, they can be quite clumsy on all fours. In the exotic pet trade, you typically find 3 flying squirrels; Southern Flying Squirrels, Eastern Flying Squirrels, and less commonly, Northern Flying Squirrels. Their care is mostly intercha
Post a comment
Location: Cheshire, UK
Read more 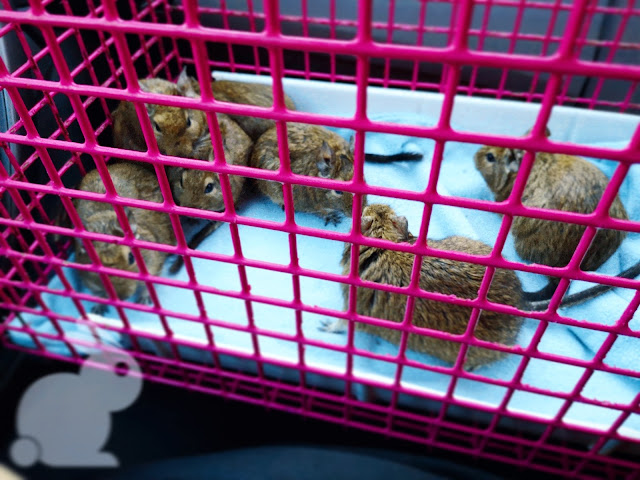 Dosha arrived as part of a rescue case to take in some degus from a hoarder who'd become overwhelmed with the number of degus within their care. Sadly, those degus were also inbreeding. They'd been predisposed to disease and neglect. We've written a previous blog-post about them. You can follow us on social media:  Facebook ,  Instagram , and  Twitter To learn more about us, visit  our website You can donate to us via our  Paypal ,  Amazon Wishlist ,  Patreon ,  GoFundMe  and  Hay Experts Wishlist For any other enquiries, please email bacchusresidents@outlook.com Falling out with Dosha: Dosha had become unwell, and the group wanted her out! One of her herd-members inflicted a fairly significant facial wound. As she was being bullied, we strongly suspected that she'd become unwell - prey animals naturally hide signs of illness. There were no outward signs of illness, so we decided to run some urinalysis: Glucose: -tive Bilirubin: +tive Keto
Post a comment
Location: Cheshire, UK
Read more
More posts