Those of you who followed us at the time will understand why we've decided to discuss Jacob and Messiah in a single post. We will start at the beginning. 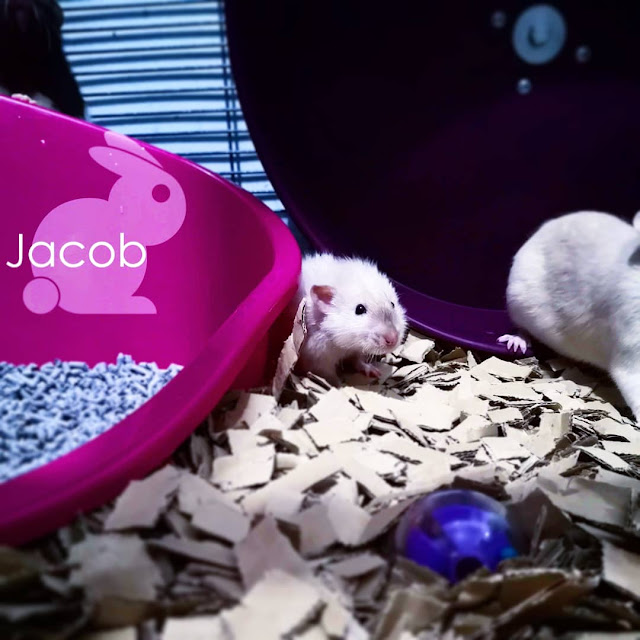 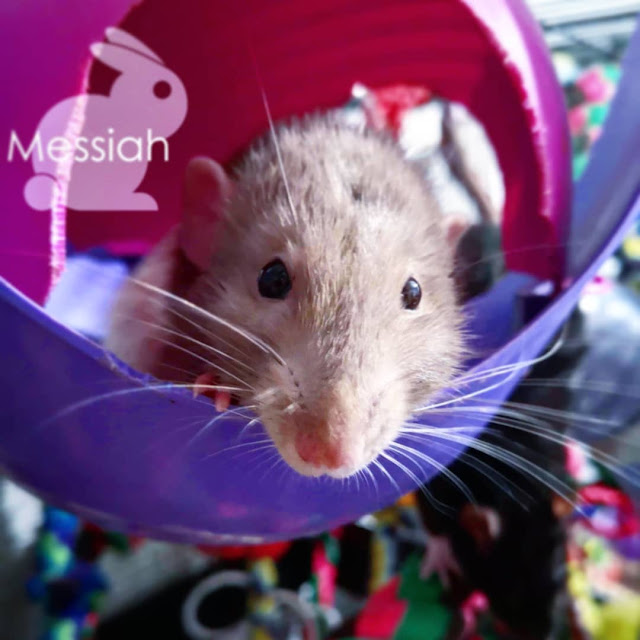 This post will contain graphic descriptions and images of injuries from traumatic events.

Jacob was castrated at 5 months old because he was inflicting very severe injuries on other rats. The worst of which was inflicted upon Oscar, who was a rescue rat at the time. 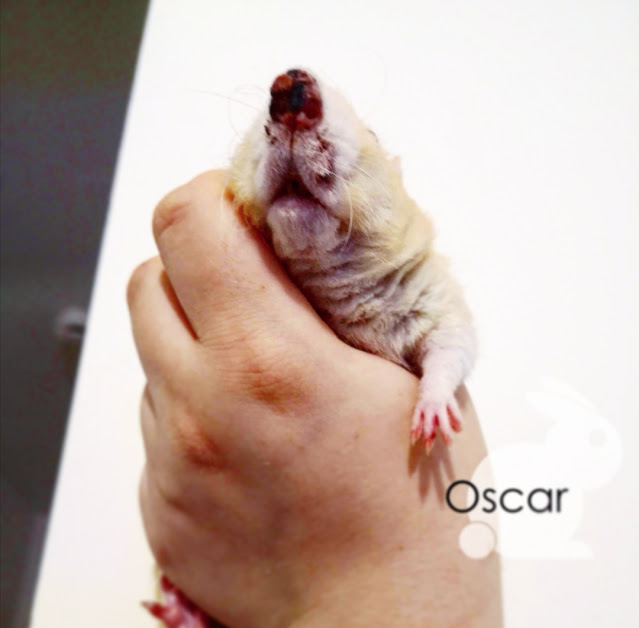 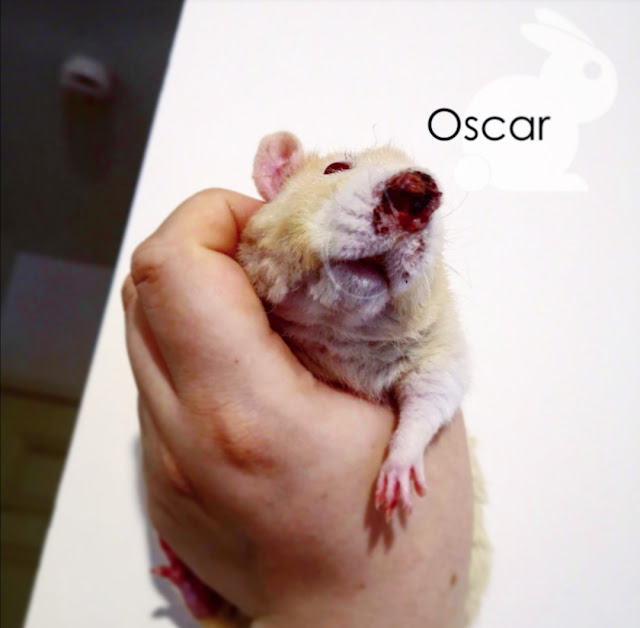 Oscar recovered quickly enough with oral antibiotics and non-steroidals, but we knew Jacob's behaviour had gotten out of hand. 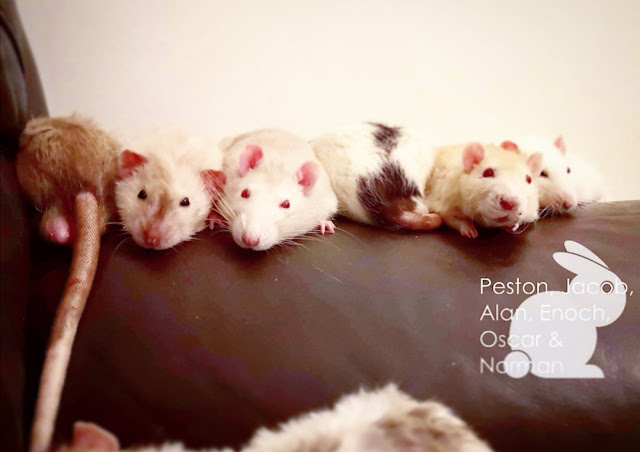 Jacob recovered swiftly from his castration, and his behaviour improved substantially. He was introduced to the resident bucks once again.

Bonding Jacob to Does:

Over time, Jacob's behaviour seemed to worsen whilst he was living with the males. He started inflicting more injuries and the severity of such injuries was worsening. We decided he would be better living amongst does and neutered bucks. 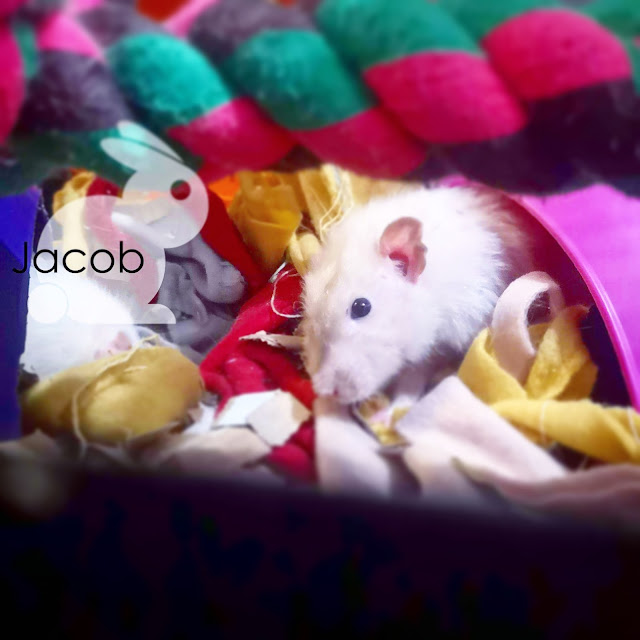 For a while, things worked well. Jacob seemed more submissive and less reactive in his new mischief.

We came downstairs to what can only be described as a shocking scene. Blood was all over the bedding and we could see Jacob had blood on his fur. Messiah seemed to be in an abnormal posture, so we investigated further.
This is when we found fatty tissue being exposed from Messiah's abdomen.
Before we even had time to process what had actually happened, both Jacob and Messiah were rushed into the vets, and Messiah was booked straight in for emergency surgery to attempt to repair the damage. 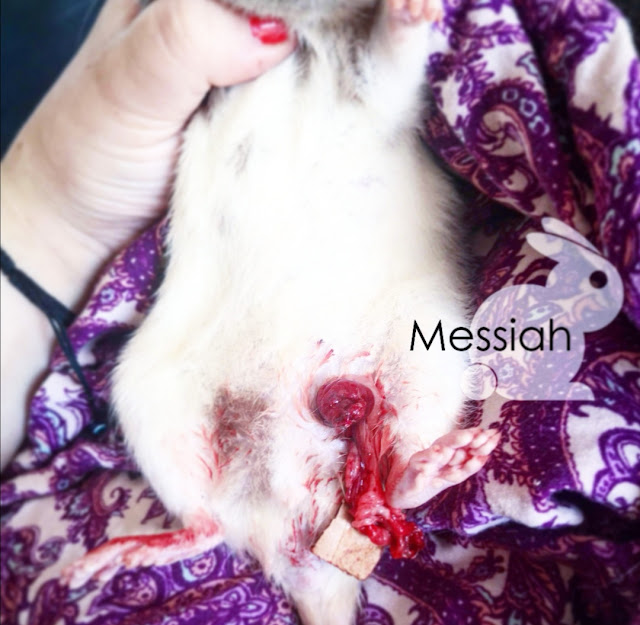 Unfortunately, during the surgery it became clear that more than just fatty tissue had been damaged, it was discovered Jacob had severely damaged Messiah's intestines too. The injuries were irreversible and the kindest decision was to have Messiah humanely euthanised. 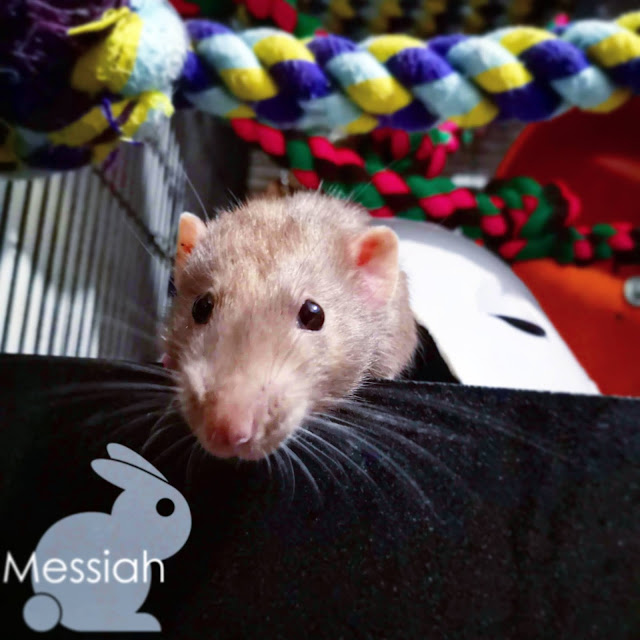 Messiah was a beautiful boy who'd been found as a stray. A kind vet nurse brought him to safety before trying to find him a forever home - that home would be with us.
When Messiah arrived he too was suffering from hormonal aggression, and he also required a partial tail amputation due to some tail-bone being exposed at the tip (visible in pictures below). 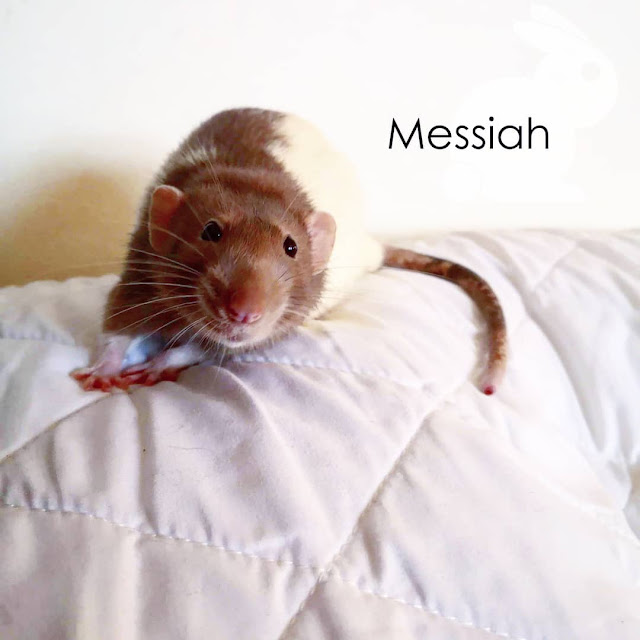 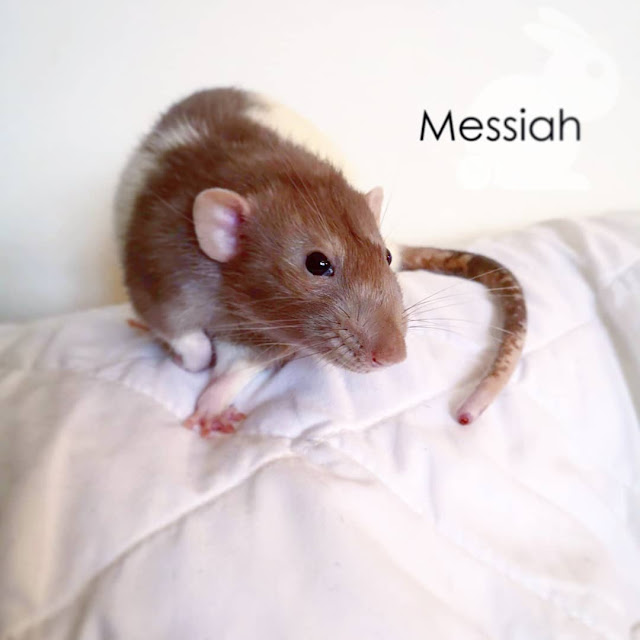 Both surgeries were performed under the one anaesthesia. Messiah recovered brilliantly and his behaviour did a full 180. He lived happily amongst females for may months.
Messiah passed away on the 17th of July 2020.

How Jacob is Today:

Fortunately, when Jacob was also rushed into the vets they discovered he had no injuries as a result of what happened. With that being said, we were aware that Jacob couldn't truly be "fine" in order to of behaved the way he did. We had to wonder why he had such an extreme reaction to something that seemingly appeared unprovoked.
We looked at Jacob's ongoing medical history which included hyperplastic dermatitis and chronic parasite infections as a result of likely being immunocompromised. Fortunately, after numerous trials and errors, we found an ongoing treatment plan that managed these symptoms. 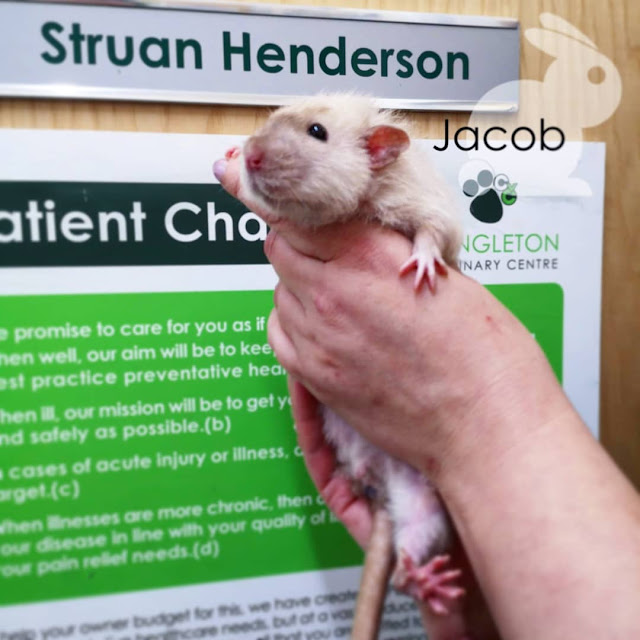 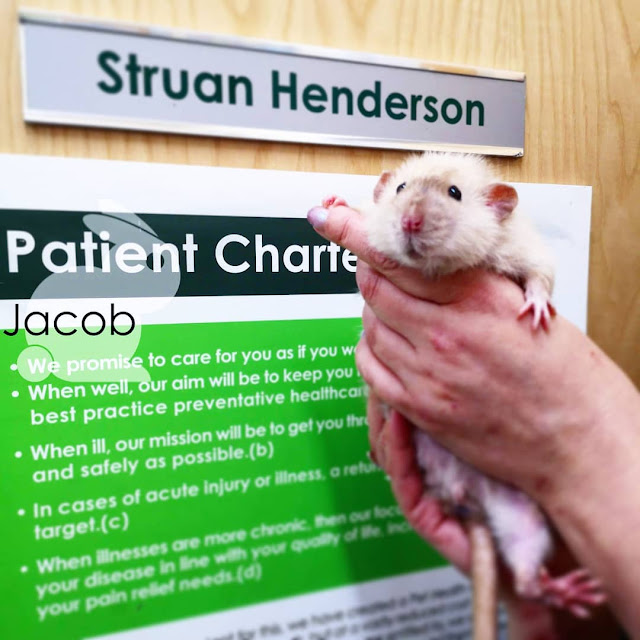 We had wondered if Jacob's skin was actually hypersensitive. Jacob wasn't only aggressive and withdrawn around other rats, he acted the same around humans too.
We decided it was best to trial Jacob on oral Gabapentin. Sadly, as Jacob had been neutered and we'd exhausted all other options, our only thing left to do was house him alone. It wasn't a decision made lightly, but too many rats had been injured, and one had now been killed. It wasn't fair on the other rats. 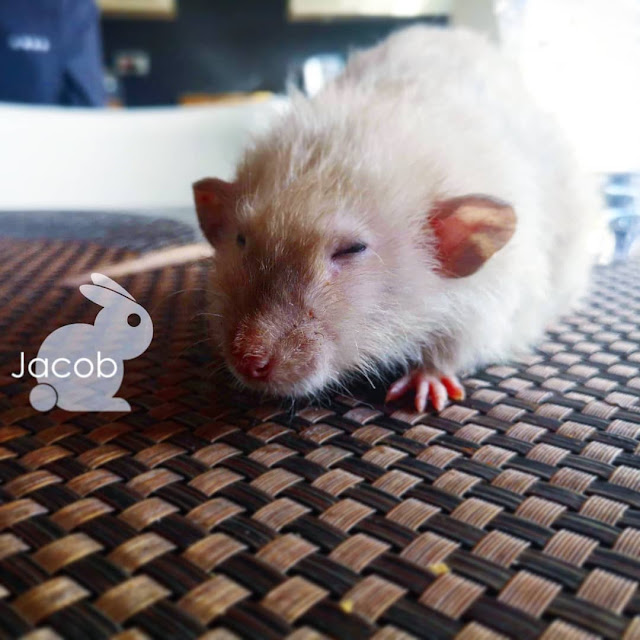 A few months after trialling Gabapentin: 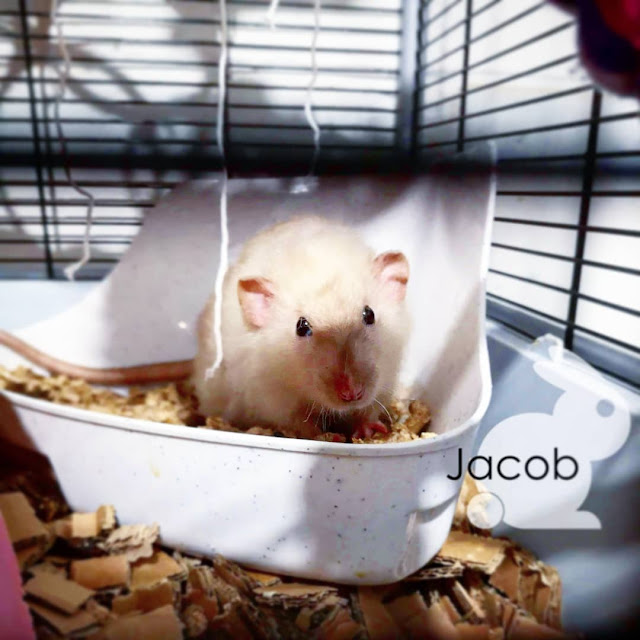 Now Jacob has been on Gabapentin for some months, we can see visible improvements in his appearance (comparison to grimace scale) and his behaviour. Sadly, Jacob will never have another rat companion. It's a tremendous undertaking to ensure Jacob isn't entirely depressed and isolated, but we always do our very best to ensure our residents live their best lives.
Animal Rescue Castration Exotic Animal Fancy Rats Norway Rat Orchiectomy Rats Rattus Norvegicus Small Animal
Location: Cheshire, UK