We were contacted by our trustee, Sarah, regarding a rabbit that had been surrendered to a nurse at her veterinary practice. The original owner had surrendered her as they were unwilling to pay for the treatment their rabbit needed for a dislocated carpus and broken radius. We agreed to help rehabilitate Penny so she could go on to find a forever home - she was only 5 months old.

Penny had already had some treatment for her broken leg including radiographs and a Robert Jones bandage; this is used for orthopedic support. The following xrays are of the injury before treatment:

With the help of first aid, painkillers, and lots of rest, Penny's break had become stable and she was able to have a bit more freedom, but it was very important she didn't overdo it. The following xrays are of the injury 3.5 weeks later:

Penny arrived into foster care still with somewhat restricted free roam. Despite having gone through a pretty horrendous injury and being rehomed, Penny was extremely bright and full of love. We couldn't believe how resilient this tiny little girl was - a tiny but mighty rabbit.
Not surprisingly, Penny wasn't spayed of vaccinated. So, she was booked in for her vaccines after a brief settling period in her foster home. A week or so later, we had Penny spayed and whilst she was under we had further radiographs taken. 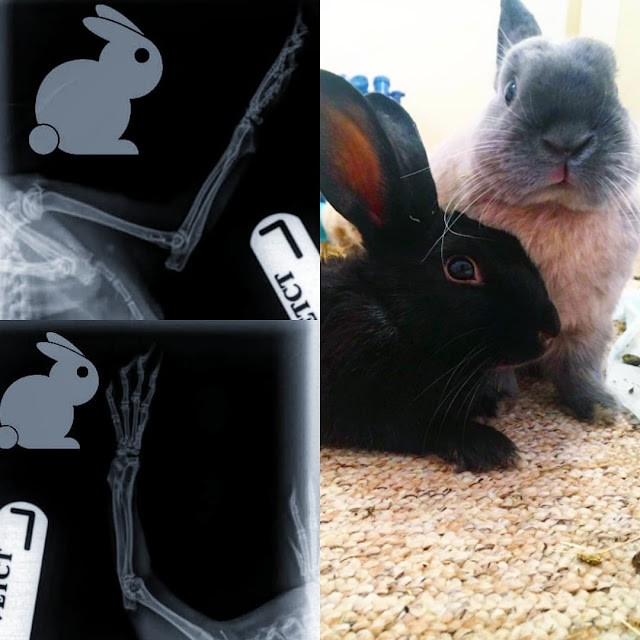 Penny's injury had healed very well and before long, she was adopted by her foster carer and now lives as a free roam house bunny with a few friends of her own. Yay Penny!