That's probably the longest title we've ever typed! Today's post is all about introducing the 8 new doe rats who've recently come into our home due to their previous owner having some difficulty managing the treatment for their health. Their day to day care was brilliant, however, a couple of the females unfortunately fell ill, and when their owner acknowledged they could no longer manage, they made the noble and selfless decision to hand them over to someone who could - us.
We saw their advert on 'Rat Rescue Network UK' and something about the girls just touched us and we decided to offer a helping hand. All will become clear if you make it to the end of the post (or you can cheat, we will split the post into clearly labelled sections).

Amelia is a roan dumbo at approximately one year old with no known health conditions. She's a sweet and cheeky doe with bundles of character. 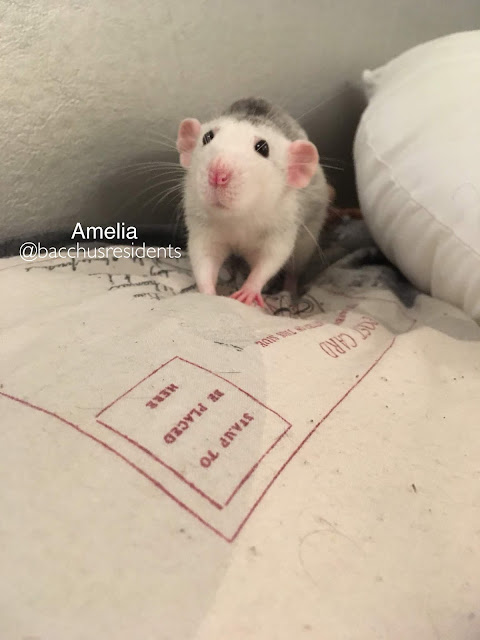 Amidala is a blue hooded dumbo at approximately one year old with a history of respiratory flare ups. Her previous owner mentioned that she'd used F10 and normal Saline (0.9% sodium chloride) for her flares - she is known for having a sensitive system.
As expected, the stress of moving brought on a flare of audible respiration difficulties with Amidala. After hearing them for ourselves, it sounded like more of a crackle with mucus/phlegm than anything else. It was audible and definitely seemed to be impacting both her upper and lower respiratory airways.
Amidala benefits greatly from just nebulized normal Saline twice daily for 45 minutes. She's currently in the process of having a 30 day course and then we will see if we can get a short-term period of relief without any therapy.
She is a placid and gentle girl who loves to hand out lots of licks and grooms. 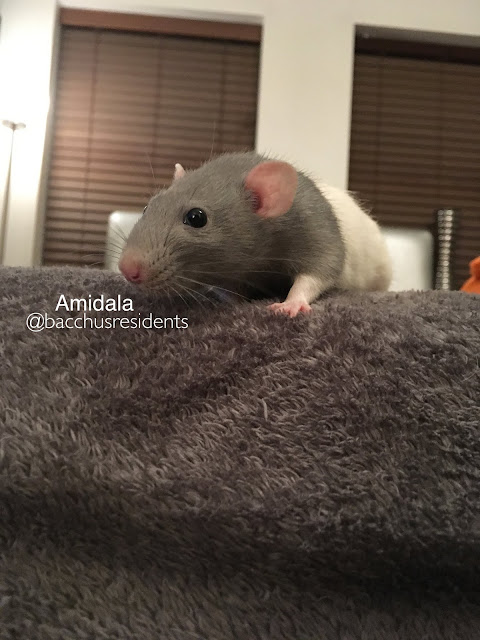 Cinnamon is a roan dumbo doe who is approximately one year old with a similar health complication to Amidala - only less severe.
Cinnamon has one 45 minute session of nebuilisation with normal Saline daily in order to loosen any mucus. She is currently going through a 30 day course and then we will trial her without to see if we can hopefully give her some short-term relief.
Cinnamon is a fun-loving rat who seems to be best friends with all of the members of her mischief. 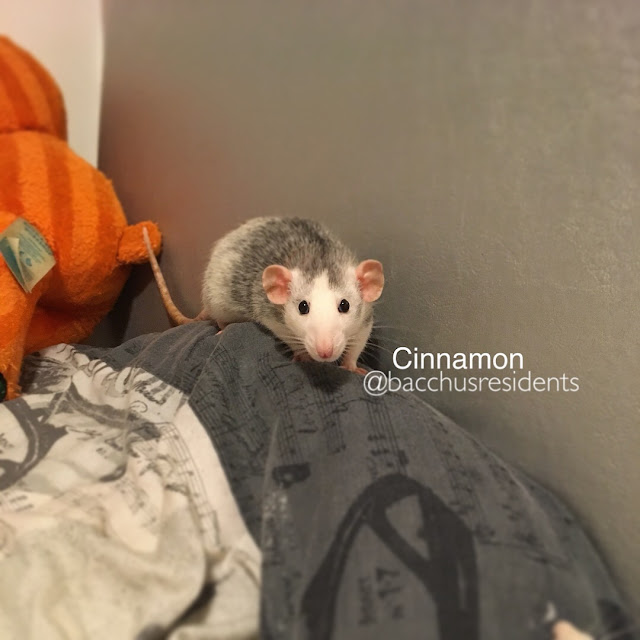 Debora is a roan dumbo and is approximately one year old. She has no known health conditions. Debora is a easy going rat who loves to play games with her fellow mischief. 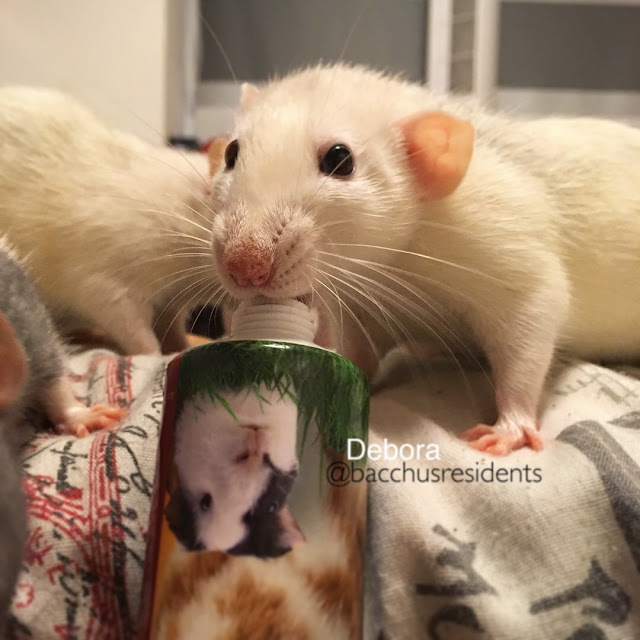 Mabel is a hairless dumbo, though not a true hairless as she does still have her whiskers, eyelashes and some fine hair on her body (a true hairless/sphynx has no hair whatsoever). She is approximately over one year old with no health complications. Mabel is obviously an absolutely stunning rat who adores kissing faces and human company. 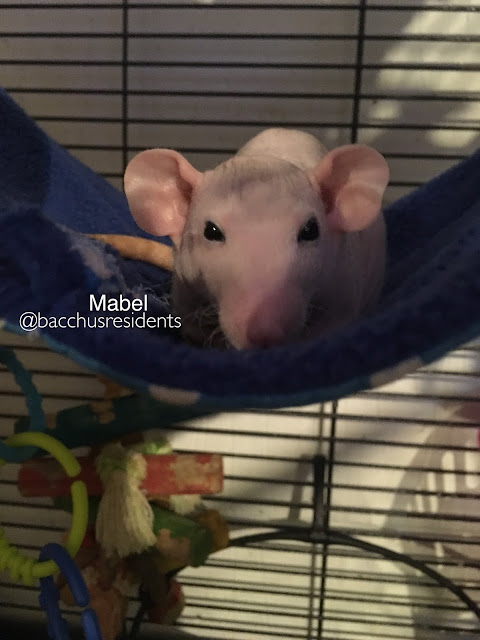 Pandora is a black hooded top-ear rat who's over one year old. Pandora has no health conditions. She's a placid and laid back girl who loves to snuggle with her friends and pinch all of the best sleeping spots. 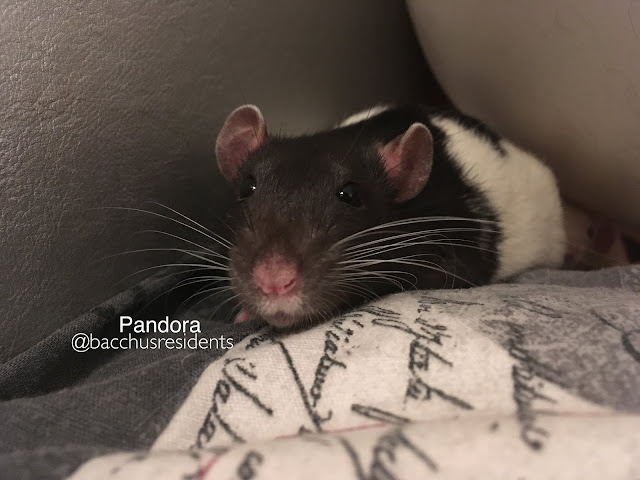 Nella is a top-eared roan and approximately over one years old. We agreed to take her on as we saw their previous owners were unable to operate on the girls due to the various unfortunate circumstances already mentioned. She had a large mammary tumour which had been growing at a rapid rate. We offered to take her and her friends on so they could remain together, and the Nella could also go on to live a long and happy life. She is otherwise healthy and is a very sweet little doe.
We will write a separate post about the surgery to remove the tumour. 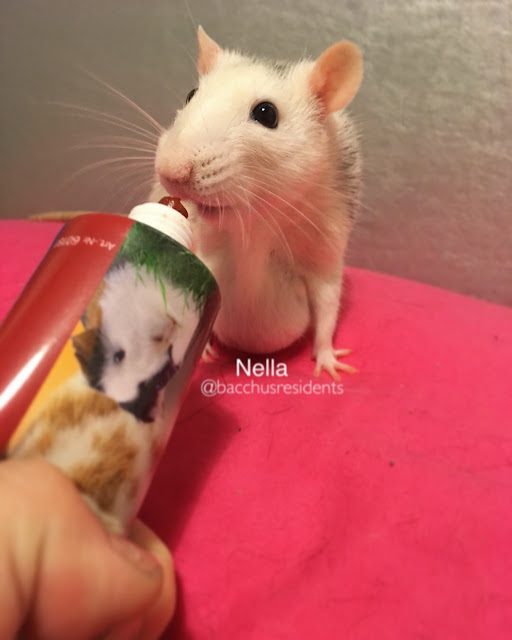 Xander is a top-eared roan doe and is approximately over one years old. Xander was in a similar situation to Nella, only her mammary tumour was smaller and in a different location. Again, we agreed to take her on as well so she could remain with her mischief and have surgery to remove the tumour. Xander is otherwise healthy and is an extremely outgoing and adventurous soul.
We will write a separate post about the surgery to remove the tumour. 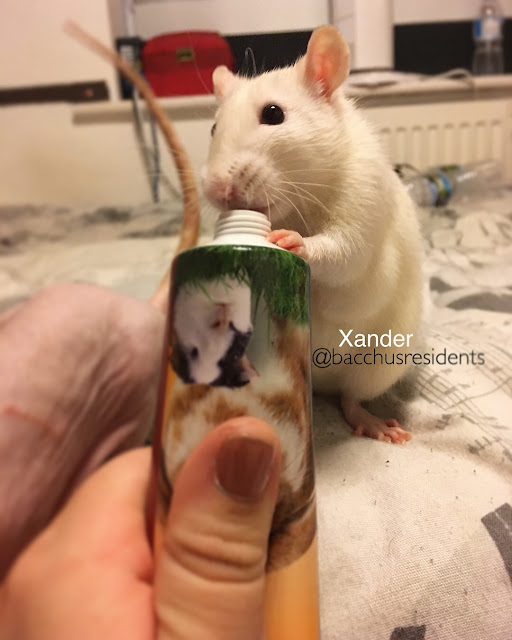 You can keep up with all of the girls on our Instagram.